A mutagenesis-derived broad-spectrum disease resistance locus in wheat. This mutant (MNR180) enhances resistance to three rusts with the characteristics of delayed disease development at the seedling stage and completed resistance at the adult plant stage.

Wheat rust is a group of deadly, constantly changing fungal pathogens that pose a serious threat worldwide. Globally, the three wheat rusts ‐ stem, leaf and stripe rust ‐ are the most economically damaging diseases of wheat. All inflict heavy losses when epidemics occur, but stem and stripe rust are the most harmful, inflicting losses of 60% or more. Successful control of stem rust ‐ mainly through resistance breeding ‐ is estimated to have saved farmers worldwide over $1 billion annually for more than four decades. However, past wheat breeding successes cannot protect the world’s wheat crop indefinitely against this changing set of pathogens. http://www.annualreviews.org/doi/full/10.1146/annurev‐phyto‐072910‐095423 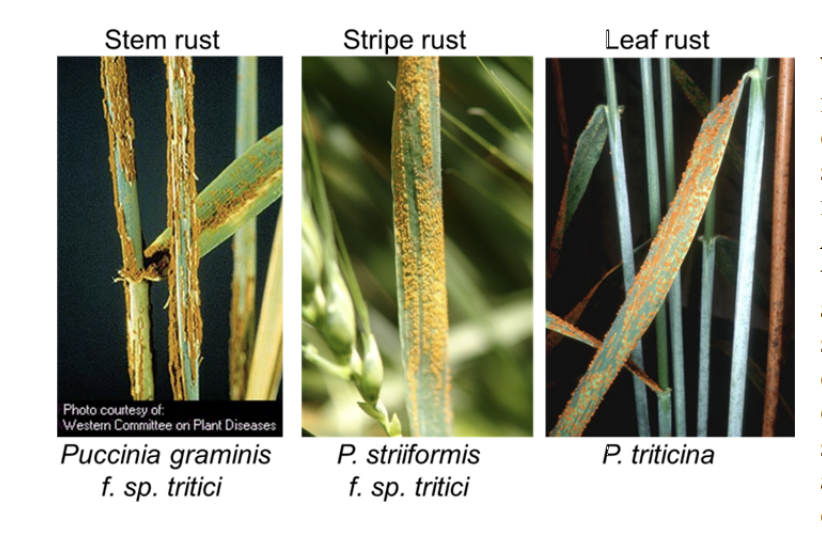 Wheat rusts, like other pathogens, can evolve into new strains that are more virulent and damaging to wheat crops. Ug99 is one such strain of stem rust, which emerged in Uganda in 1999. It has since spread beyond East Africa to Central Asia. The major concern is that the majority of the wheat varieties across East Africa, West and South Asia are susceptible to this virulent strain or its derivatives. Similarly the Yr27 virulent strain of yellow rust has caused significant losses in some countries in North Africa, Near East and Central and South Asia during serious epidemics in 2009, 2010 and 2013.

Breeding durable disease resistance cultivars relies largely on continually introgressing new resistance genes ‐ especially genes with different defense mechanisms ‐ into adapted varieties. However, genetic engineered crops continue to have a stigmatism in the market so that non‐GMO derived traits are preferred. To that goal, researchers at Montana State University have obtained a new resistance gene via EMS mutagenesis, a non‐GMO laboratory technique well accepted in plant breeding for commercial use. This mutant (MNR180) enhances resistance to three rusts with the characteristics of delayed disease development at the seedling stage and completed resistance at the adult plant stage.

A mutagenesis‐derived broad‐spectrum disease resistance locus in wheat. Rust resistant mutant MNR180 was selected at M4 generation from an EMS mutagenized Alpowa population. MNR180 has enhanced resistance to wheat leaf rust race PBJL when selected. The plant then was selfed to M5 generation and non‐segregating offspring were tested with 5 additional races of leaf rust, 10 races of stem rust (including Ug99 and derivatives), and 5 races of stripe rust. MNR180 showed enhanced resistance to all the leaf rust and stem rust races tested at the seedling stage. The mutant showed resistant response to one out of five stripe rust tested at the seedling stage, but resistant to all at the adult stage.

Technology Transfer and Development Status: MNR180 has been crossed with Chinese Spring and Alpowa, respectively for developing mapping populations. Currently, both populations have been advanced to F3 generations. Meanwhile, the mutant has been crossed and backcrossed to Alpowa twice. Provisional patent application has been filed and a manuscript is in development with publication expected in Q3, 2014. A genetic map of the locus is available. This discovery was made at Montana State University by Dr. Li Huang, Department of Plant Biosciences.