Technique for growing cells with highly reproducible and predetermined curvature can be used to understand the role of geometry in cell function and disease.

Cell geometry in early-stage development is recognized as being a critically important key feature to cell function in a variety of organs. Cells evolve into highly curved and folded micropatterned environments that are challenging to study in a controlled in vitro environment. Culturing cells with predetermined curvature allows investigation of how cell shape plays a role in determining cell function. Researchers at Montana State University have developed a micro- and nano-fabrication technique to precisely mold curved channels in an agarose gel so that cultured cells are forced to grow in a controlled curvature. The researchers successfully demonstrated the technique by growing neuronal cells with fixed curvatures to observe how early cell shape can alter neurite network growth and ultimately dictate neuron and brain function.

The MSU cell culturing method provides a low-cost hydrogel substrate containing precise 3D curved channels. The curved channels force primary neurons or other growing cells into relevant arcs specified by the investigator. Proof-of-concept was conducted growing primary cortical neurons in vitro that were forced to grow in curvature arcs during real-time in vitro microscopy. The results showed that distinct curvature ranges leave a unique fingerprint of neuronal network behavior based on calcium signaling and mitochondria dynamics. With this technology, one can finetune regulatory events in neurite networks based on controlled curvatures and bending forces. This technique can be expanded to study cell development in a variety of curvature-dependent cell and tissue growth models. 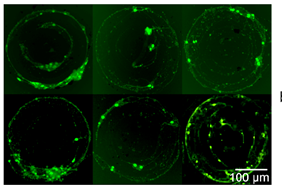